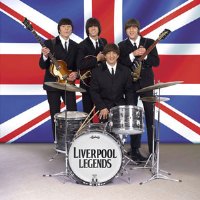 Liverpool Legends, Beatles Tribute Band consists of four talented musicians and actors who were hand-picked by Louise Harrison – sister of the late George Harrison of the The Beatles. Louise’s involvement with Liverpool Legends makes them the only band in the world with a close, direct biological link to the original Fab Four.

Headlining their own production in Branson since 2006, the show has received the prestigious Branson’s Visitor’s Choice Award in 2009, and also Best Show in 2010. They have also received national attention for re-creating The Beatles’ famed 1966 concert at Busch Stadium in St. Louis.
They are presented at the conference as part of their “Help Keep Music Alive” outreach initiative, and will perform with the Chester High School Band, Helen Mogen, director.